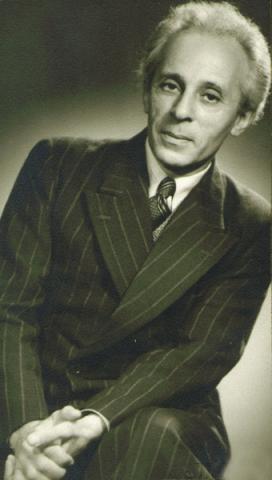 Aaron Avshalomov (1894–1964) was born in Nikolayevsk, eastern Siberia, where his grandfather had established a profitable business after being exiled from the Caucasus in the 1870s. Aaron was sent for medical studies to Zürich, where his musical interests blossomed. He attended the Zürich Conservatory briefly—which constituted his only formal musical education. After the October Revolution, in 1917, which made further studies in Europe impossible, his family sent him to the United States—via Manchuria and northern China. Less than a year later, having married a fellow Russian émigré in San Francisco, he chose to return to China. Apart from a short period in the mid-1920s, when he spent three years in Portland, Oregon, Avshalomov remained in China until 1947. For a number of years he lived in Peking, where he worked for China Booksellers and then for Libraire Française. Despite his lack of musical training—apart from the one term in Zürich— he began composing. He developed an approach that grafted elements of traditional Chinese music—which he had first encountered as a child among the Chinese community of his Siberian hometown—onto a colorful Russian style in the manner of Rimsky-Korsakov. He used the Western-oriented symphony orchestra to imitate and evoke sounds of traditional Chinese instruments, and he also transcribed characteristic ornamentations and used such instruments as temple blocks and finger cymbals. Among his first works of this type was an opera, Kuan Yin, which was premiered in Peking in 1925.

Avshalomov achieved some performances of his works in America during his stay there in the 1920s, but he was unable to establish either a position or a significant reputation in the United States, and he returned to China in 1929. He settled in Shanghai, where there was an established Jewish community, and he became the head librarian of the municipal library and, in 1943, conductor of the Shanghai City Symphony. His works during this second period in China include concertos for violin and piano and two additional operas: The Twilight Hour of Yan Kuei Fei (1933) and The Great Wall (1933–41), which was premiered there in 1945.

During the period of the Japanese invasion and occupation of China, and then the Second World War, Avshalomov lived there under house arrest. His son, the composer Jacob Avshalomov, had been born in 1919 in China but had emigrated to the United States in 1937, and after the war his father joined him—this time remaining permanently.

In his initial postwar years in America, Aaron Avshalomov saw the premiere of his Dream of Wei Lin; and his Third Symphony (1953) was commissioned by Serge Koussevitzky.