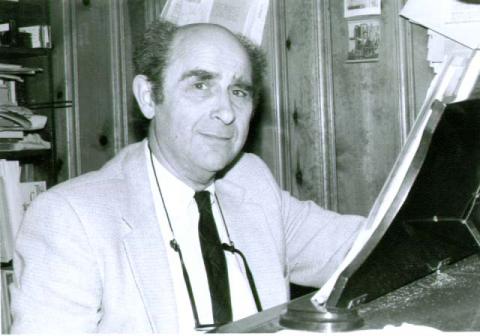 Allan Blank was born in New York in 1925. His early musical training was on the violin. He attended the High School of Music & Art where an interest in conducting and composition was fostered. Further studies were at the Juilliard School of Music (1945-1947), Washington Square College (BA, 1948), University of Minnesota (MA,1950) and the University of Iowa. He was a violinist with the Pittsburgh Symphony Orchestra (1950-1952) and has taught at a number of schools and universities. Currently he is a retired professor of composition at Virginia Commonwealth University in Richmond, VA.

Recent awards include First Prize in the George Eastman Competition (1985) sponsored by the Eastman School of Music for his DUO FOR BASSOON & PIANO, and a grant (1985) from the National Endowment for the Arts in support of his one-act opera, THE MAGIC BONBONS. He was commissioned by the Virginia Shakespeare Festival at Williamsburg to write music for their production of Measure For Measure.

In 1985, he received a commission from the New York State Council on the Arts' Presenting Organization to write a clarinet quintet for the Roxburg Chamber Players. This work has been recorded and released on the OPUS ONE label. He has received four commissions (1979, 1988, 1991, 2007) from the Virginia Music Teachers Association. In 1988 he won both the ERIC SATIN MOSTLY TONAL AWARD for his string trio, FANTASY ON CANTILLATION MOTIVES, and the ANNUAL CHORAL COMPOSITION CONTEST sponsored by the Chautauqua Chamber Singers for his setting called POOR RICHARD'S ALMANACS. In 1989 Prof. Blank was a winner in the LIND SOLO SONG COMPETITION sponsored by Cornell University, and in 1990 he was awarded a grant from the Virginia Commission of the Arts for his CONCERTO FOR CLARINET AND STRING ORCHESTRA. He died in November 2013 in Richmond.

Published by MUSIC FOR PERCUSSION INC.