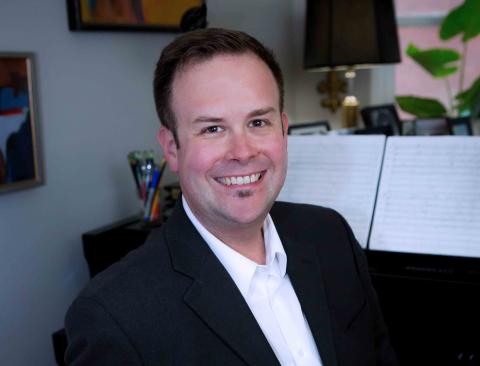 Andrew Ardizzoia (b. 1979) is a native of the San Francisco Bay Area, where he began his studies in music at an early age.  His catalog of orchestral, band, choral, chamber, and solo vocal works have been performed on four continents by a wide variety of soloists and ensembles.  His music, described as “exuberant, rhythmic, and great fun,” as well as “smart, intriguing, and masterful,” has earned numerous awards and commissions including the Hartt School’s Diemente Award in composition, a Zoni nomination (Arizona’s top theatre award), as well as grants from Arizona State University, the University of Hartford, and the Alvin Edgar Fund at Iowa State University.

Recent performances have included the premiere of Andrew’s “Quod erat demonstrandum…” by the Iowa State University Wind Ensemble at the CBDNA North Central conference, and his transcription of Debussy's Clair de Lune by the Arizona All-State Honor Orchestra.  Andrew’s Etudes and Fugues for solo marimba have been performed by percussionist Matthew Coley in Lucerne, Stuttgart, and across Northern California. Other performances include the premieres of his Ritmos Colorados and Stonewall Magnificats for percussion ensemble, and performances of the Songs of Introspection in both Michigan and Connecticut.

During the summer of 2015, Andrew served as composer-in-residence at the Heartland Marimba Festival and Academy.  His works have also been heard at conferences around the world, most recently at the Keiko Abe Lucerne International Marimba Academy (KALIMA), as well as the World Saxophone Congress, the North American Saxophone Alliance, the International Horn Society, and the International Summer Arts Institute in Italy.  Recent works may be heard on recordings from the International Arts Educators Forum and the Percussion Ensemble at Fort Lewis College.

Andrew’s works have also been performed at Arizona State University, The Ohio State University, the University of Oregon, both Idyllwild and Interlochen, and at many other colleges, festivals, and museums.  Recitals dedicated to his works have taken place in California and Arizona, and his music has been part of art installations, dance programs, and theatrical productions around the Pacific Rim.

Andrew earned the D.M.A in composition with a cognate in music theory from the Hartt School of the University of Hartford in 2014.  He also holds the M.M. in composition from Arizona State University, and the B.M. in composition from the Conservatory of Music at the University of the Pacific.  His primary teachers have included Stephen Michael Gryč, Robert Carl, Rodney Rogers, James DeMars, Robert Coburn, and François Rose.  He has participated in masterclasses with composers Christopher Theofanidis, Jennifer Higdon, Michael Torke, and Jonathan Newman, as well as with conductor Karla Lemon at the Scotia Festival of Music.  He also studied conducting with Henrik Jul Hansen and Eric Hammer.  Andrew regularly leads clinics and performances of his music with ensembles of all types.

Andrew currently serves as Assistant Professor of Music and Director of Composition and Instrumental Studies at Muhlenberg College in Allentown, PA, where he also directs the Wind Ensemble. He has also taught at the Hartt School, Arizona State University, Naugatuck Valley Community College, and Paradise Valley Community College.