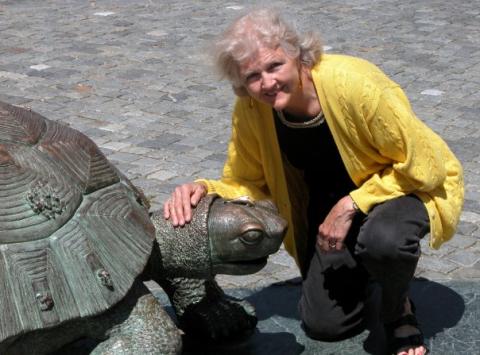 Born in Baltimore, Elizabeth R. Austin received her early musical training at The Peabody Conservatory. When Nadia Boulanger visited Goucher College (Towson, MD), she awarded the composer a scholarship to study at the Conservatoire Americaine in Fontainebleau, France, after hearing Austin’s Drei Rilke Lieder. Her association with the Hartt School of Music (University of Hartford), where she earned a Master’s in Music while on the faculty, included the establishment of a faculty/student exchange with the Staatliche Hochschule für Musik Heidelberg-Mannheim. While studying for her Ph.D. at The University of Connecticut, Elizabeth Austin won First Prize in the Lipscomb Electronic Music Competition (Klavier Double for piano and tape).

Her awards have included a Connecticut Commission on the Arts grant, selection by GEDOK (Society of Women Artists in Germany/Austria) to represent the Mannheim region in its 70th anniversary exhibition, and First Prize in IAWM’s 1998 Miriam Gideon Competition (for Homage for Hildegard [von Bingen], and a Rockefeller Foundation residency at Bellagio, Italy (2001). Performed in Europe and Scandinavia, as well as in The United States and the Caribbean Austin’s music has been received with distinction and critical acclaim. Featured on Germany’s Mitteldeutscher Rundfunk, the Leipzig pianist Ulrich Urban has championed her piano music, performing at the Gewandhaus and The National Gallery of Art.

Dr. Michael K. Slayton, Professor of Theory/Composition, Blair School of Music, Vanderbilt University, wrote his DMA dissertation (University of Houston, 2000) on Austin’s music. Dr. Slayton also edited the book, Women of Influence in Contemporary Music: Nine American Composers, Scarecrow Press, 2011, also writing the chapter on Austin’s music. Dr. Teresa Crane, U. Illinois, wrote a DMA dissertation on Austin’s song cycles (2007). In several IAWM Journals (2001-2014), her music has been the subject of interviews and articles. The online journal SCOPE (Winter, 2011) has a feature article on her music. Dr. Austin was the BMI/Vanderbilt University Composer in Residence in 2015. An excerpt from Austins’ opera I am one and double too, was performed in a portrait concert. The Hartford Musical Club awarded her a commission and an Austin portrait concert in honor of their 125th anniversary in 2015. In 2017, Austin’s Litauische Lieder was performed in Berlin.

PeerMusic (Germany)
Waitin’ and Wailin’ Blues for piano; in Blues Beyond Borders 3; published 2009