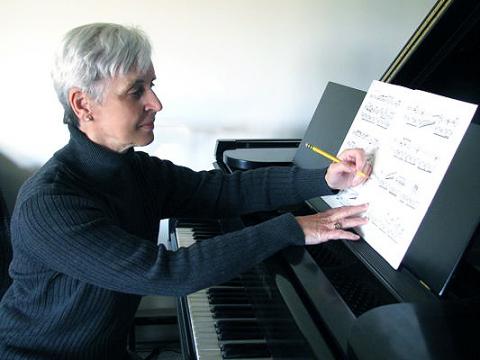 A native of Washington, D.C., Elizabeth Vercoe was called "one of the most inventive composers working in America today" by The Washington Post. Active as a composer in the U.S. and abroad. she has been a fellow at the Civitella Ranieri Center in Italy, the St. Petersburg Spring Music Festival in Russia, the Cité International des Arts in Paris, and the MacDowell Colony in New Hampshire. She has written works on commission for Wellesley College, Austin Peay State University, the Pro Arte Orchestra, and others, and received grants from the National Endowment for the Arts, Meet the Composer, the Artists Foundation, and the Massachusetts Arts Council.

Described by Gardner Read as "an exceptionally gifted composer with a fine technical command and a keen sensitivity to sound materials," she has attended concerts of her music in London, Paris, Bangkok, New York, and San Francisco, as well as international festivals in Russia and Alaska and collaborative programs of music and dance with the Beth Soll Dance Company. Since receiving her doctoral degree at Boston University, she has promoted women's music as a board member of the International League of Women Composers, Director of the Women's Music Festival/85, and author of articles on the subject. She held the Acuff Chair of Excellence at Austin Peay State University in 2003, and in 2009 attended performances of her music in Bangkok and Chiang Mai, Thailand.  In 2014 her Elegy for viola and piano was selected for performance at Bruno Walter Hall in Lincoln Center for the 75th anniversary of the American Music Center, and in 2016 Irreveries from Sappho was performed at Tanglewood.

Recorded on Navona, Owl, Capstone, Leonarda and Centaur compact discs, her music includes the Herstory series of vocal works, two staged monodramas, Despite our differences #2  for piano and chamber orchestra and Changes for orchestra, as well as music for various chamber combinations. A dissertation (J. Capaldo, Elizabeth Vercoe: Composing Her Story) about her vocal music is available online.