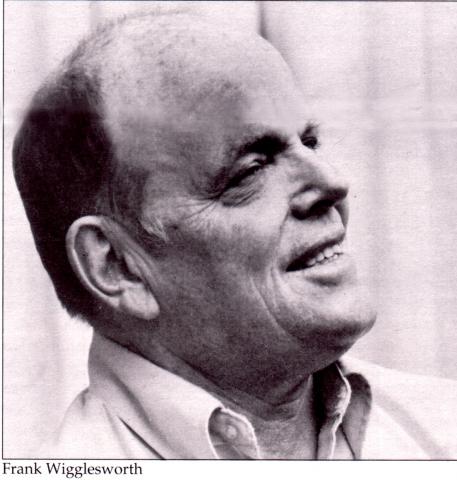 Frank Wigglesworth (1918-1996) was a composer, conductor, performer and teacher
who was a resident of New York's Greenwich Village for more than 40 years. Born
in Boston in 1918, Wigglesworth had an interest in music from an early age,
playing both the violin and viola and began composing at the age of eleven. He
went on to study composition with Otto Luening, Henry Cowell and Ernest White
at Columbia University and Converse College in Spartanburg, S.C..

In 1946, he
joined the faculty of the Greenwich House Music School, where he was associated
with (and later studied with) the avant-garde composer Edgard Varese. In 1947
he joined the faculty of Columbia University, and in 1954, after spending four
years in Europe as a recipient of the Prix de Rome, he began teaching at Queens
College and the New School for Social Research.

Wigglesworth was a Composer in Residence at the American Academy of Rome from
1969-1970 and at the Bennington Chamber Music Conference in 1975 and 1985. He
served on many boards, including The MacDowell Colony from 1985-1988 and the
Youth Orchestra of New York. He was also the founder of the Thursday Evening
Concerts at the Greenwich House Music School, organized in 1987. Wigglesworth
was President of the American Composers Alliance from 1980-1984.