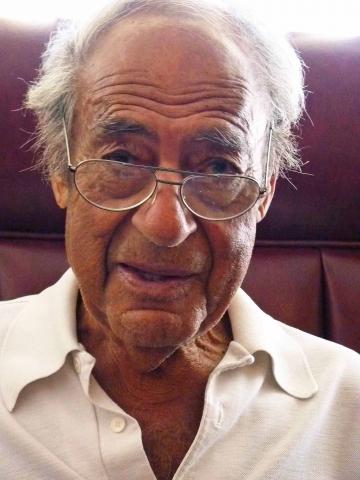 In the words of the great pianist, Claudio Arrau, Frederic Balazs (1919-2018) is "a brilliant conductor of rare gifts with musicianship, intelligence, and inspirational capacity of great depth." Born in 1919, in Budapest, he became concert violinist and concertmaster of the Budapest Symphony at the age of 17. He acquired his intense affinity with the technique and spirit of the orchestra by working under such greats as Bruno Walter, Toscanini, Ormandy, and Furtwängler.

Balazs came to  the United States and joined the Army, after Pearl Harbor, serving with several adventuresome "distinctions". As a result of his service, Balazs was awarded a lifetime honorary membership to the American Composers Alliance upon returning home. 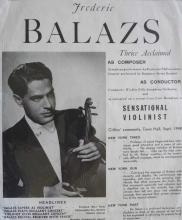 At the age of 23, his Divertimento was performed in California, at a meeting of the International Society for Contemporary Music. His music was compared to that of Bartok, and his string quartets have received unusually high praise, and comparison with the great quartets of Shostakovich, Ives, and Piston. His music has been characterized as plaintive, lyrical, and also romantic, or vigorous and high-spirited.

Balazs is known for his work in building and establishing young ensembles, such as the Wichita Falls Symphony and the Tucson Symphony, both of which blossomed into major ensembles under his direction. He was often sought out as a director of training orchestra programs in seminars and festivals. Composer Miklos Rozsa comments that Balazs in "an excellent conductor who works with and engenders reciprocal warmth and enthusiasm." Conductor Antal Dorati singled him out as "a splendid violinist and a conductor of rare gifts."

Through his long life and wide experiences, Frederic Balazs possesses an unlimited repertoire of symphonic, concerto, operatic, and pops literature. As a champion of contemporary music, he recorded many premiere works for CRI, a label that was originally founded by the American Composers Alliance. He received the Alice M. Ditson Award for outstanding contributions to American music, honorary membership in the International Mark Twain Literary Society, and many other awards and honors.

He lived for many years in San Luis Obispo, California, where he founded Music and the Arts for Youth (MAY), to assist and award young talent. His work with, and on behalf of children and youth in music was recently on NBC Evening News as the "Musical Genius and the Pied Piper of California."

Maestro Balazs is currently living in Arizona, where he composes full-time. He was celebrated in 2003, during the 75th anniversary celebration of the Tucson Symphony, and his "Song--after Walt Whitman" for orchestra performed by the TSO with the Arizona Boys' Chorus, and "Prayers from the Ark" for children's voices and piano, both major works, were performed in celebration of the Boys Chorus's 70th anniversary in November, 2009.

His piano was a gift from his friend and colleague, ACA composer Walter Mourant.