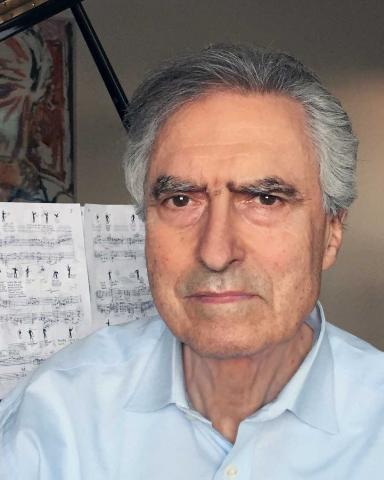 Gheorghe Costinescu, born in Bucharest in 1934 and residing in New York since 1969, has been active as a composer, conductor, pianist, musicologist, and educator.

After studying privately with Pascal Bentoiu and earning an M.A. in composition from the Bucharest Conservatory under Mihail Jora, he continued his studies with Karlheinz Stockhausen in Cologne and Luciano Berio at The Juilliard School in New York. In 1976 he received a Ph.D. with Distinction from Columbia University, where he studied with Chou Wen-chung.

His chamber, choral, orchestral, and stage works have been performed in major cities in Europe and the United States, and at the Royan, Shiraz–Persepolis, and Tanglewood festivals.

His stage work The Musical Seminar, a winner in the League-ISCM National Composers Competition, was premiered at Lincoln Center in New York City; the German version of the work was produced by the State Opera of Stuttgart, and the British premiere took place at the Royal Scottish Academy of Music and Drama in Glasgow.

Costinescu has received grants and awards from the American Academy of Arts and Letters, the National Endowment for the Arts, the New York Foundation for the Arts, the American Music Center, Meet the Composer, and the Ford Foundation. He was a Fulbright Scholar and also received the Romanian Academy’s George Enescu prize; The Juilliard School’s Alexandre Gretchaninoff Memorial Prize; and fellowships from MacDowell Colony, Yaddo, and the Virginia Center for the Creative Arts.

His theoretical writings include articles on contemporary music, essays on comparative aesthetics, and A Treatise on Musical Phonology.

Gheorghe Costinescu has held teaching positions at The Juilliard School, Columbia University, and the New School for Social Research. In 1982 he joined the faculty and subsequently directed the electronic music program at Lehman College of the City University of New York, where he became Professor Emeritus of Music in 2003.

His Multimedia Retrospective at Merkin Concert Hall, New York, May 5, 2015, was covered by New York Classical Review under the title “Craft and Virtuosity Spotlighted in the Fascinating Music of Gheorghe Costinescu”  “...a composer with a rare range of creativity.”