Echoes in the Snow 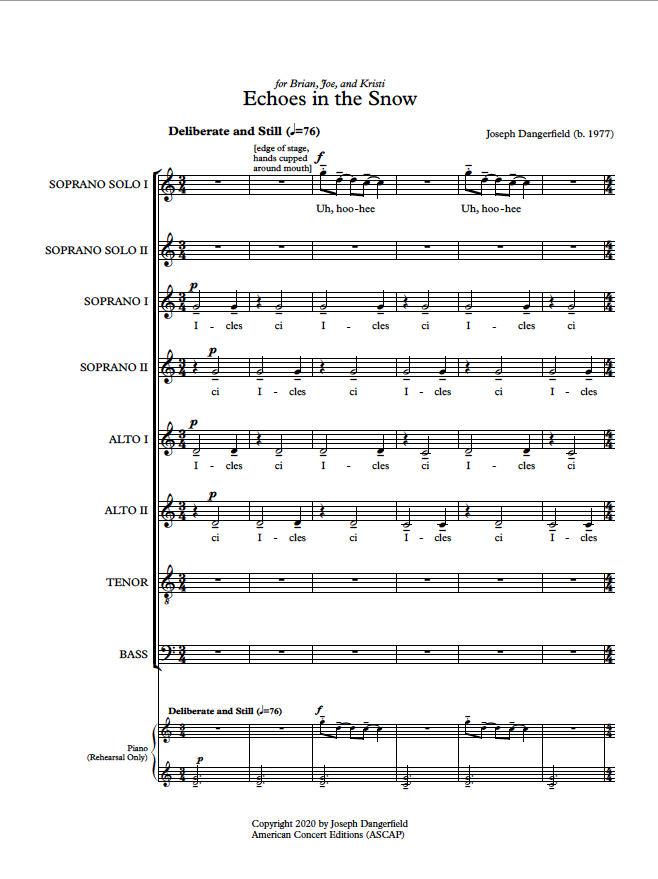 Echoes in the Snow

Echoes in the Snow was composed in memoriam of three of my oldest and best friends, all of which have passed away in the last five years. Brian Jennings (2014), who died of complications of cancer, Joseph Dotterweich (2018), who also died of complications of cancer, and Kristi Case (2019), who died of a heart attack. Much of our childhood was spent playing in the snow, usually in the field behind my house, as well as a few other locations in town. In this work, I employed the use of the ancient art of Swedish Kulning, which was song used to call livestock home. When properly employed, the style of singing could be heard for miles. The text of the song represents the view of the Kulning singer: the choir repeats the word Icicles, in broken syllables, which becomes I-seecles, changes to I seek you, and, finally, to, I see you. The symbolic meaning is one of longing to see those that I can never see again. Finally, while writing the work, the following passage from Henry Scott-Holland’s (1847 - 1918) sermon “Death, the King of Terrors” (1910) resounded in my mind:

Everything remains exactly as it was.

and the old life that we lived so fondly together is untouched, unchanged.

Whatever we were to each other, that we are still.