JANE EYRE, an opera in 3 Acts 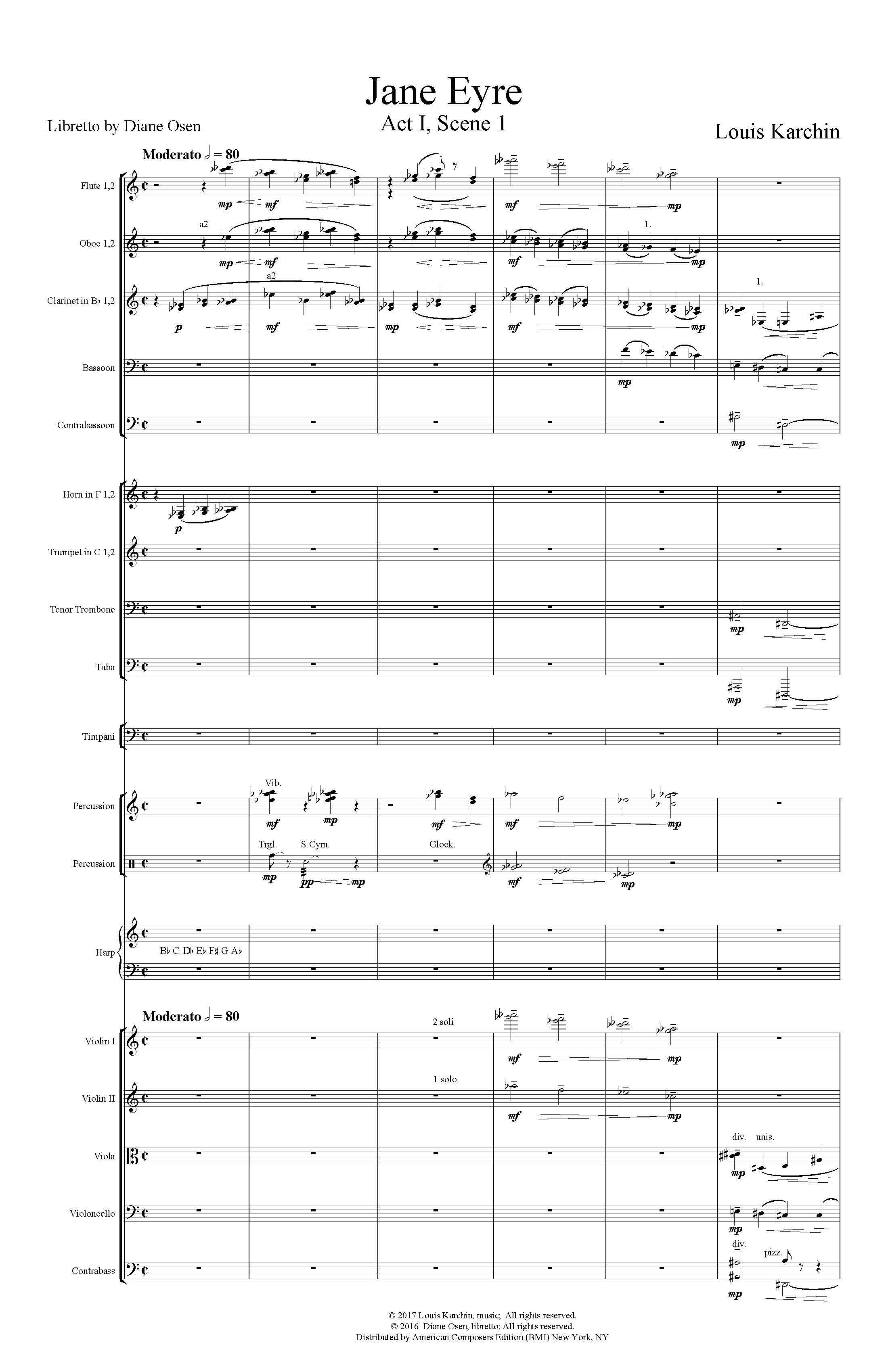 JANE EYRE, an opera in 3 Acts

"Naxos adds another gem to its American Opera Classics series with Louis Karchin’s Jane Eyre, an appealing work whose veneer of accessibility masks finely wrought complexities. Already recognized for several acclaimed song cycles and the one-act opera Romulus, Karchin (b. 1951) describes Eyre, composed over a four-year period, as “the largest project I have ever undertaken”. He is clearly a master of theatrical writing. In the best operatic traditions, the score has an inner logic that mirrors the dramatic progression of each aria, scene, and the piece as a whole. The lilting phrases of the Prelude immediately establish an atmosphere of Gothic Romance, and structural formality evokes the sense of period. There are three acts with three scenes each, and Diane Osen’s libretto (Karchin rightly calls it a “feat of compression”) abounds in neat rhyme schemes that strike a remarkable balance between plainspoken clarity and what the composer terms a “faithful echo” of Bronte’s “distinctive syntax”.

The composer’s engaging and melodious vocal writing employs a variety of expressive techniques to differentiate the characters. For example, in the final scene of Act I, Rochester opens up to Jane about his history of dissolution with short phrases and awkward intervals. When Jane responds (‘It is God alone who judges’), her vocal lines are even and sustained, and the captivating sweetness of the three-note falling figures in the orchestra exorcise Rochester’s demons in a flash. There are numerous orchestral highlights as well, all with purpose and direction, like the interlude between the second and third scenes of Act 2 that sets the mood for Jane’s aborted wedding to Mr Rochester. A number of full-blown solos for the principals, designed to “help establish their characters and the emotions that motivate them”, are inserted into the first act.

Thus, two consecutive and contrasting arias in the very first scene give Jennifer Zetlan the opportunity to display her commanding vocal presence in the title role. Her instrument is a bright and flexible soprano, and she makes every phrase sound natural and artless. It’s no wonder Zetlan is in high demand for new works …Ryan MacPherson gives a fully committed performance of Mr Rochester, a role that demands the robustness of a verismo tenor. He hits all of the character’s explosive cadences on the mark and shows a flair for character singing, as when he disguises himself as a Gypsy in order to elicit information from Jane about her feelings for him. Together, Zetlan and MacPherson make the most of the exquisitely moving redemption scene that ends the opera. The full libretto is included, though hardly required, thanks to the happy confluence of Karchin’s canny setting of text, the consistency of the singers’ diction, and the high quality of the audio engineering. Under the composer’s direction, the Orchestra of the League of Composers plays the sumptuous score with notable grace."

“Karchin’s Jane Eyre is an old-fashioned opera, bold in its aim, unblushing about opera’s traditions. I got the feeling that Karchin was writing from the heart, as well as the head—that he was not out to impress critics or colleagues, but to write a good opera…... “He tells the story through the orchestra, as much as the singers, with their words. This is a symphonic opera as much as a vocal one. Karchin writes like a man who has lived with opera, although Jane Eyre is only his second opera, and his first full-length one. Ah well: Beethoven wrote just one opera. So did Gershwin.

In the Kaye Playhouse, Jane Eyre was served by a very good production, overseen by the director, Kristine McIntyre. Use of video was intelligent. At every turn, the production enhanced the story, libretto, and music, rather than overtaking them. The Directors’ Guild may revoke McIntrye’s membership…. “The librettist, too, deserves a bow. She has performed a feat of compression. Osen’s libretto is dotted with interesting couplets. I wrote one of them down: ‘Can I trust you with this task?’ ‘Need you ask?’ The composer, and the librettist, and the stage director—and the novelist, Charlotte Brontë—had me the whole way. The end was moving, as Jane returns to Rochester, in his wrecked physical state. I thought, ‘This opera, in its warmth, beauty, and goodness, is brave."

"The music of Louis Karchin (b. 1951) has received rave reviews from five Fanfarers, including myself, going back to the LP era (Fanfare 9:1, September/October 1985). It has been compared to a slew of great composers, including Berg and even Beethoven; let me add Hugo Weisgall. If the world heeded its Fanfares, Karchin would surely be recognized as one of America’s greatest composers.

The music of Jane Eyre (2010–2014) is equally remarkable. It still retains elements of the avant-garde (Milton Babbitt, Roger Sessions, Charles Wuorinen) but has mellowed considerably. It is complex and harmonically adventurous, but admits a font of grand lyricism most appropriate to Charlotte Brontë’s late Sturm und Drang novel. Karchin’s orchestration is supremely colorful, yet dark enough to limn Jane’s bleakest moments.

The poetic libretto simulates Bronte’s ever-expressive language. Contrary to Naxos’s usual practice, the libretto is included in the booklet. Eagerly recommended to all."

"Diane Osen’s sturdy libretto for Karchin does a good job of boiling the novel down to its essence: the romantic relationship between the governess Jane Eyre and Rochester, master of the estate on which she is employed. The opera is paced engagingly and, like Lucia di Lammermoor (Donizetti fragments having been quoted earlier), it builds to a stormy Act 2 climax in which an intruder interrupts a wedding ceremony….. “[The] final duet came off as a high point, a soaring piece that put a four-note motif through churning modulatory progressions before reaching a serene sustained chord to end the opera in a Wagnerian manner. This was just one element of Karchin’s richly eclectic style…. “Karchin, a New York University professor whom Andrew Porter called a ‘composer of ‘fearless eloquence’, proved himself a master of his craft. CCO served Jane Eyre well, especially in the casting of the leading roles with Jennifer Zetlan as Jane and Ryan MacPherson as Rochester, who brought their characters to vivid vocal and dramatic life…. “ Keenly directed by Kristine McIntrye."

The following roles may be combined: Roderick Ingram and St. John Rivers, Mrs. Ingram and Diana Rivers, Bessie and Mary Rivers, Richard Mason and Mr. Briggs. Acts 1 and 2 may be performed with a short pause between them rather than a full intermission. The Children's Chorus in Act 3 may be omitted, and instructions for this cut are noted on pages 485 and 515 of Act 3.

The completion of Jane Eyre was assisted by a deeply appreciated fellowship from the John Simon Guggenheim Foundation.