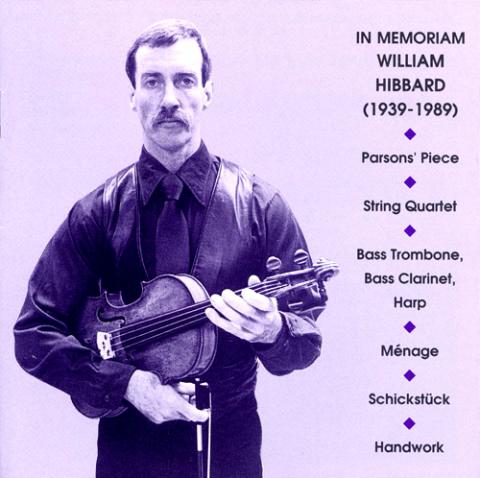 William Hibbard (b. 1939) was a distinguished composer, conductor, violist and teacher. He was appointed to the University of Iowa Music Composition faculty in 1966, and promoted to full professor in 1977. He became Chair of the Theory and Composition area in the School of Music in 1982. He served as Music Director of the University's professional new music ensemble, the Center for New Music, from its inception in 1966 through 1988. In addition, he served as Director of the University's Center for New Performing Arts, an interdisciplinary arts project funded jointly by the Rockefeller Foundation and the University of Iowa, from 1965 through 1975. Both organizations have made enormous contributions to the promotion, understanding and advancement of new music and art. In 1986 the Center for New Music received the Commendation of Excellence Award from Broadcast Music Inc (BMI). In 1990 the American Composers Alliance conferred its Laurel Leaf Award upon the Center for New Music "in memoriam William Hibbard."

As a violist, he served as Principal Viola of the Quad City Symphony (James Dixon, Music Director) from 1984 through late 1988. In addition, he was founder and Director of the Iowa City String Orchestra from 1980 to 1986.

As a composer, he wrote more than forty works, including compositions for mixed chamber ensembles, voice, orchestra and solo instruments. His musical compositions employ strict serial techniques with virtuoso instrumental writing, contrapuntal complexity and unique orchestration. His composition Ménage (1974) for soprano, trumpet and violin was selected by the U.S. jury as one of five American works to be submitted for the 1977 ISCM Festival in Bonn, Germany. In 1988 he was honored with the Distinguished Alumnus Award from the New England Conservatory.

When asked to describe his music for the Lingua Press Collection II Catalogue, he wrote: "When asked for my views of my own music I freeze. Such requests seek to elicit a verbal – and, it seems to me falsely concrete – grasp to a composer's sonic abstractions. Personally, I desire to fashion something wrought well. Logic and imagination interact to fertilize and focus those desires so that, in the end, the music itself may say it all."