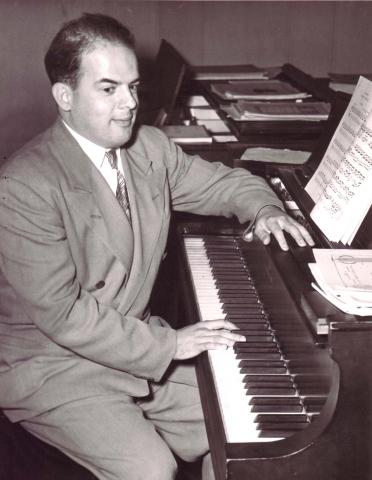 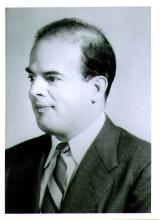 Forrest Goodenough, B.M., M.M., composer, pianist, and professor of music at Trinity University in San Antonio, was born in 1918, in South Bend, Indiana. He received national recognition in the field of composition with works performed by the New Orleans Symphony, Eastman-Rochester Symphony, Horace Britt String Quartet, the First Piano Quartet of NBC, WQXR String Quartet, and others. He was a longtime member of ACA and of the American Association of University Professors.

The composer of the much celebrated orchestra pieces, "Chorale Fantasy" from 1950, and "Elegy" in 1960, was totally blind. He also taught at the Texas State School for the Blind in Austin. Mr. Goodenough received awards for his "Two Essays for Small Orchestra" chosen by the Albuquerque Civic Symphony, conducted by Hans Lange, had his "Symphonic Tone Poem" broadcast on CBS in 1943, and also won the Woodstock Foundation for the Arts financial support grants in 1948-49.

Goodenough wrote pieces for multiple pianos, which continue to be requested, including "Dance of the Apes" and "Danza Rhythmica" which have been performed in recent years by keyboard ensembles around the world.

His Woodwind Quintet was often performed, on various concerts with his contemporaries, frequently including Gordon Binkerd, Roger Goeb, Otto Luening, and Richard Donovan. His "Five Piano Pieces for Children" was published by Wilking Music Company in Indianapolis.

Forrest R. Goodenough was born July 27, 1918 in South Bend, Ind., and
died on August 14, 2004 in Gravette, Ark. He lost his sight at age 5 and
grew up during a time when our culture had a limited view of the amazing
potential of children who didn't see. He was around people who loved him and
believed he could do nearly anything -- which came to include carpentry,
digging a basement under an existing house, building a cabin, ice skating,
riding a tandem bicycle, cooking, finding his way around New York City,
attending Butler University and DePauw University and earning a master's at
Eastman School of Music. His earliest musical compositions and performances
were in grade school. In 1965 he was ranked 9th of the top 150 American
composers by the American Composers Alliance.

In the 1940s he lived in New York City and was the staff pianist at
NBC. He also held two other regular jazz piano jobs at the Cotillion Room
and the Barbary Room. At that time he met and ran around with George
Shearing and Lenny Tristano. In Woodstock, N.Y., he had a year-long
sabbatical to live in the Old Maverick House and complete classical
compositions. His first wife, Lucia C. Greer, and daughter have fond
memories of their arts colony life.

In 1949 he accepted a faculty position at Trinity University in San
Antonio, Tex., teaching theory and composition. In 1952 he and Dorothy
Churchill Goodenough began 25 years of teaching at the Texas School for the
Blind and Visually Impaired. Under their guidance, the music program
blossomed to include a string ensemble, an orchestra, band, and numerous
award-winning soloists. He and Dorothy Churchill Goodenough were married
for nearly 51 years; she died in January 2004.

Forrest Goodenough passed on in Gravette, Ark., while at the Texas
School for the Blind, an auditorium full of a few hundred friends, former
students, and family celebrated his life and contributions. That auditorium
was renamed the Goodenough Performance Hall; a charitable fund was
established to benefit future students. He was survived by his daughter,
Crow Johnson Evans, and her husband, Dr. Arthur F. Evans; his first wife,
Lucia C. Greer; and by his niece by marriage and her husband, Diane
Churchill Rautenberg and Norm Rautenberg of New Hampshire.