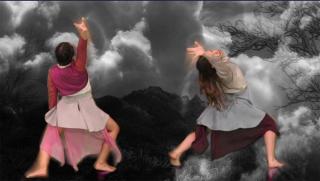 Music of Hubert Howe to be featured on the upcoming Spread Spectrum concert in Russia, on Saturday 18 July 2020.

Inharmonic Fantasy No. 10 for piano and fixed media, by Hubert Howe, will be performed by Rushaniya Nizamutdinova and Rezeda Amirkhanova, Kazan.

In addition, Broken Glass - a screendance by John Crawford and Lisa Naugle, (see photo above) will be performed, set to Inharmonic Fantasy No. 13 by Hubert Howe. Converging reality and dreamspace, the film uses the interplay of light and broken surfaces to consider modes of perception and the inner work of imagination. Choreographed phrases were captured in a green screen studio, then recombined with time-lapse footage from natural environments, juxtaposed to evoke passing shadows and fragmentary forms.

The online Gala concert of the Spread spectrum festival being held on July 18 from 1.30 PM to 9.30 PM (Moscow time) will include participants from New York, Moscow, Tokyo, Stuttgart, Melbourne, Saint Petersburg, San Francisco, Irvine, Philadelphia, Pittsburgh, Kazan, etc. music from the 17th-21st centuries, for piano, organ, strings, brass, chamber ensembles, and live - electronics. Some performances will be done by remote video and some will be live-on-the-spot during the actual broadcast. Also you will see contemporary dance performances, video art, and electroacoustic music.