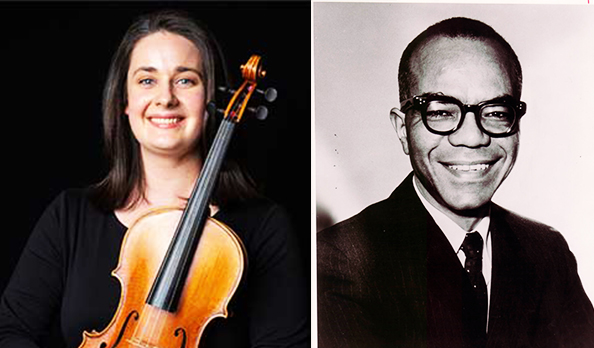 Video streams on Friday evenings that showcase the talented musicians of the Boston Symphony Orchestra.

Three BSO violists perform on this program of all 20th-century masterworks. Both the English composer Rebecca Clarke’s and the German Paul Hindemith’s sonatas date from 1919, and both are staples of the viola-piano repertoire. The eminent American composer-conductor Ulysses Kay’s musical voice has roots deep in the American experience. He wrote his Sonatine for Viola and Piano in 1939, to receive possibly its premiere online performance/recording this year by Mary Ferrillo, viola, and Brett Hodgdon, piano. The great Italian composer Luciano Berio’s Naturale creates a remarkable landscape for viola and percussion evoking Italian folk song and incorporating pre-recorded Sicilian street cries.

Available online from July  31, 2020 at 8PM through August 7
An account for streaming will be required. Sign up here.

Violist Mary Ferrillo joined the Boston Symphony Orchestra in September 2019. An active freelancer, she has performed with the Philadelphia Orchestra, Kansas City Symphony, and the Rhode Island Philharmonic. Ms. Ferrillo spent three summers (2012-2014) as a Fellow of the Tanglewood Music Center, where she received the 2014 Maurice Schwartz Prize by Marion E. Dubbs. She returned to Tanglewood as a member of the New Fromm Players in 2016 and 2017, premiering works by John Harbison, Joseph Phibbs, Kui Dong, and Marc Neikrug, among others. She has also performed at the Spoleto Festival USA, Japan’s Pacific Music Festival, the National Orchestral Institute, and the Green Mountain Chamber Music Festival. As a chamber musician, she performs frequently in the Boston and Berkshire areas in concerts actively combining contemporary and classical repertoire to create engaging and unique programs. At the University of Pennsylvania’s 2018 “Rochberg @ 100” centennial celebration, she performed Rochberg’s Seventh String Quartet with other Tanglewood colleagues alongside the Daedalus Quartet. Ms. Ferrillo earned her bachelor of music degree at the University of Maryland–College Park with Katherine Murdock. She received her master’s degree from the New England Conservatory, studying with Roger Tapping and Edward Gazouleas.