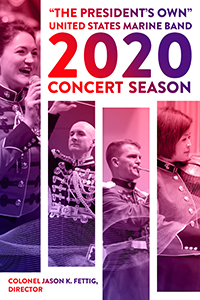 Each piece on this unique program presents a different take on the idea of the concerto, from the traditional to the eclectic. What binds these works together is the virtuosic display of the considerable capabilities of each of the many instruments of the symphonic band.

Two living composers will join the Marine Band for performances of their music during this concert: Steven Bryant, with his brilliant Concerto for Wind Ensemble that has quickly become one of the most innovative works in the contemporary wind repertoire, and composer David Froom, who has written a new concerto for wind ensemble entitled Three Fantasy Dances composed specifically for “The President’s Own,” and this concert will be its world première.